Julie Jung and I set out on June 14th, 2022 to climb the East Buttress of Mt. Whitney (Grade III, 5.7, 1,000 ft). We planned to do the approach in the morning, the climb the same day, stay the night at Iceberg Lake, and climb Mithril Dihedral (Grade III, 5.10a, 500 ft) on Mt. Russell the next morning before descending the East Ridge of Mt. Russell back to the car.

Stats and the Trip

The temperatures down in Lone Pine were near 100 F that day, with the Whitney Portal area (the trailhead) significantly cooler. The forecast for ~12,500 ft (near the base of our climb) was sunny and close to 60 F.

We started our hike at 6:38 AM and it was nice and chilly at the trailhead. It heated up quickly as we gained our first few hundred feet into the sun.

Overall, our approach took 3 hours and 44 minutes. We got to Iceberg Lake just before 10:30 AM.

We ultimately hiked back down the next day, taking just under two and a half hours.

We did our best to go light on this one, opting for a tarp and open bivy at Iceberg Lake after our climb.

The approach went quick and we were basking in the sunlight at Iceberg by mid morning.

After filtering some water and setting up camp, we decided to give it a go.

We decided to head up the climb in our sun shirts and windbreakers, around 12:30. It took a little longer than suspected to make it to the base of the first pitch, probably about 45 minutes or so.

The first bit was fun, until a fatefully very incorrect topo led us astray on the second pitch, followed by a fun (i.e. loose and scary) traverse to get back on track. We ended up somewhere around the fourth pitch or so (not terribly far below the PeeWee landmark) when the sun dipped behind the summit and we became very cold. At this point we started trying to gun it to the top as fast as we could.

After the Peewee, we mostly found a lot of loose 4th class climbing with a few 5th class moves sprinkled in, getting off route again. Long pitches were difficult with the rope drag and the wandering route.

We surprised the crap out of some hikers on the summit when we topped out around 6 PM. We were cold and hungry so begged for snacks, got some cashews that had been stored in a dude's pocket, and took off for our camp and dinner.

The descent is a loose downclimb to the north, then an abrupt turn to the east and is called "The Mountaineer's Route".

After making it back to camp we were pooped and talked about how cold the route got. We really wanted to climb Mithril, but the route would be even colder first thing in the morning, and the only additional clothing we had would be our puffys. We didn't think it would be enough. We brought enough food to get to the trailhead hungry mid-late afternoon, and discussed waiting until the route got into the sun, which should be around 10:30 or 11, but thought that was cutting it a little close with how much food we brought.

We were bummed but decided it would be better to come back for it. The next day we had burgers at Whitney Portal and margaritas at Jake's Saloon in town as a consolation prize.

Overview Continuing my trend of writing up some posts now that I am resting post-surgery... Back on June 18, 2022 Julie Jung and I scrambled up the southeast face of Mt. Emerson for a beautiful day on one of the Sierra's most approachable big mountains. Mt. Emerson provides a decent

Overview I am currently laid up from surgery and thought this would be a good time to finish up some posts on earlier adventures. On June 10, 2022 Julie Jung and I set out in the morning to climb Kamp's Ridge on Mt. Olympus to the north summit, traverse to 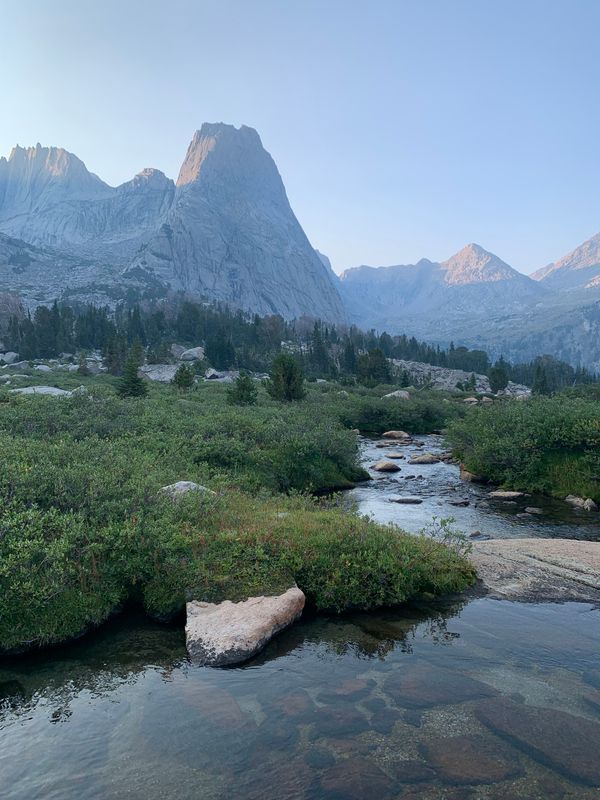 I know a few people headed to the Winds for the first time, and found myself repeating advice and thought it might be better written down and shared. If you're making your first trip to the Cirque of the Towers hopefully you find this helpful. Getting There There are a